in the village of Shenley, Hertfordshire 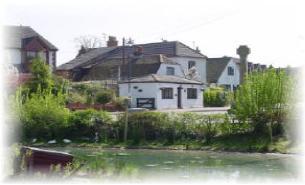 The old cage or lock up by the central pond which bears the inscription 'Do well and fear not. Be sober and vigilant'.

A Brief history of Shenley Church

Nobody, however charitable, would say that Shenley Methodist chapel was a beautiful building. Neat enough but gaunt, plain and narrow it stands beside the London Road looking, among the gentler civilities of the old village like a diminutive but rather formidable nineteenth century schoolmistress, sober, stern and fairly disapproving. Perhaps without a complete remodeling of its exterior it will never quite be able to shake itself free from the outward reminders of its original purpose for it is a Methodist chapel by accident rather than design.

It was built in 1800 by the parish under an enabling Act of 1723 to house about twenty-five of its paupers. At that time the Parish of Shenley was much larger than it now is, stretching from the Colne in the north to Rowley Green on the outskirts of Barnet in the south, but even so the size of the workhouse is an indication of the widespread poverty of the period.

The national economy during and after the Napoleonic Wars was at a very low ebb. A generation after the workhouse first opened its doors, the Rector of Shenley, the Reverend Thomas Newcome testified before a Royal Commission in 1831 that in a single week 109 people had received parish relief out of a total population of 1167. Such relief was doled out by the Church Vestry through the appointed Overseers of the Poor, and it was customary to ‘farm out’ the supervision of the poorhouse to the highest bidder.

Out of this modest sum the farmers also had to take their own private profit from the transaction. It does not require any great stretch of the imagination to picture, behind the austere facade of the Shenley building, a ragged urchin, bowl in hand, trying to pluck up courage to emulate young Oliver Twist and ask for more.

The beginnings of Methodist work in the village can be attributed to a young man named Potts who, when he was just beginning to preach, was induced to try a cottage service in Shenley. It was a lamentable failure and he was tempted never to try again. But overcoming his natural nervousness, he made another attempt, only to be disturbed this time by the swarming of bees in the garden of the house where the meeting was taking place! But this time he refused to be put off, won a hearing, and eventually entered the Wesleyan ministry in 1808 becoming an effective evangelist among the villages of Essex.

There is no record of a separate Methodist Society in Shenley until 1836. Nine names are listed, of three men and six women, although the Circuit roll counts only seven members. The workhouse building needed some modification before it could be used for Methodist worship, and a rising gallery was constructed over the entrance and centre aisle, traces of which can still be seen. The first services were held in 1840 after the Local Preachers Meeting had requested the Superintendent, the Revd Joseph Floyd, to appoint a Morning Service if at all practicable. In fact, by the end of the year, there was both a morning and an evening service. It was a great encouragement to have a chapel of their own and for a time the membership of the Society grew; but after peaking at 24 in 1842 it gradually fell back again.

Two hundred and fifty years after the conversion of John and Charles Wesley  in May 1738, in St. Albans Abbey with the rest of the London North West District, Shenley Methodist members were beginning to think how to celebrate their own 150th Anniversary.

It had been a century and a half of faithfulness from a succession of ordinary Christian men and women. Frequently they had been years of struggle, during which the members had faced the possibility that all their efforts might be insufficient to ensure the continuation of the Methodist Society in the village. There had never been financial resources adequate for long-term forward planning.

Membership at its highest had never exceeded 38 and again and again it had been difficult to see where the next generation of leaders was going to come from. But the work had been maintained and God's gracious provision had never failed - there was much cause for thanksgiving! God has been good and faithful over past years and we have confidence that God will continue to be good and faithful in the years to come.

Based on ‘A Hundred and Fifty Years of Village Methodism’ by Revd Christopher H. Smith

There is an agreement still in existence from the early 1800s made between the Vestry and two such contractors to: 'take the Poorhouse in Shenley to keep and feed the poor, to wash and mend for them, make new linen, finding the thread, worsted and tape to make small clothing for the children and find food, soap, candles and string for 3 shillings and 3 pence per head.